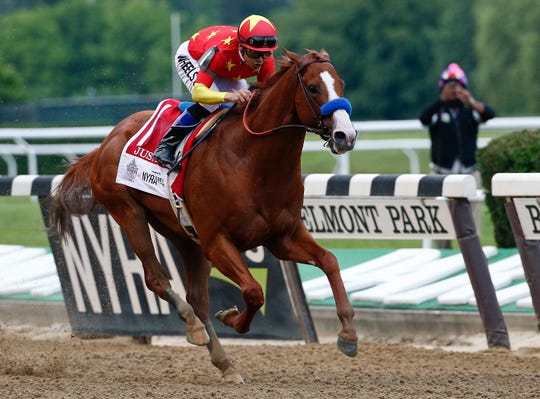 Justify, with jockey Mike Smith, crosses the finish line to win the 150th running of the Belmont Stakes and the Triple Crown on June 9, 2018. (Photo: Peter Morgan, Associated Press)

New York — The New York Times says Justify won the 2018 Triple Crown after a failed postrace drug test at a California track that could have kept the horse out of the Kentucky Derby.

The newspaper reported Wednesday that Bob Baffert-trained Justify tested positive for the drug scopolamine after winning the Santa Anita Derby, one of the final prep races for the Kentucky Derby. Justify went on to win the Derby and took the Preakness and Belmont stakes to complete the Triple Crown.

The Times said instead of a speedy disqualification, the California Horse Racing Board took more than a month to confirm the results. The newspaper also reported that instead of filing a public complaint, the board made decisions behind closed doors as it moved to drop the case and lighten the penalty for horses found to have scopolamine in their systems.

The newspaper said test results, emails and internal memorandums show how California regulators waited nearly three weeks, until the Kentucky Derby was only nine days away, to notify Baffert of the positive test. Then, two months after the Belmont victory, the board disposed of the inquiry altogether during a closed-door executive session.

“We take seriously the integrity of horse racing in California and are committed to implementing the highest standards of safety and accountability for all horses, jockeys and participants,” the California Horse Racing Board said in a statement.

A CHRB spokesman said the organization would have a further statement Thursday.