UFC 249 postponed at behest of Disney and ESPN

UFC 249 will not be happening after all, following a request from Disney and ESPN – UFC’s network partners – to postpone the event.

UFC 249 postponed at behest of Disney and ESPN

UFC 249 will not be happening after all, following a request from Disney and ESPN – UFC’s network partners – to postpone the event.

This comes after weeks of UFC President Dana White trying to find a way to make the pay-per-view event happen in the midst of the coronavirus pandemic. Furthermore, all future events have been postponed indefinitely as well. 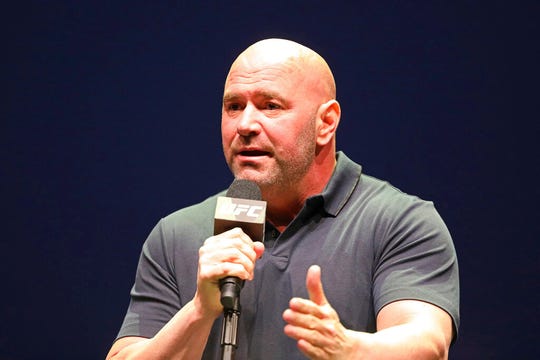 In the UFC’s official statement, White & Co. made it clear that this was not their idea.

“While the organization was fully prepared to proceed with UFC 249, ESPN has requested the postponement of the event and subsequent bouts until further notice in light of the COVID-19 pandemic,” the statement reads. “UFC looks forward to resuming the full live events schedule as soon as possible.”

In a televised interview with ESPN’s Brett Okamoto, White expanded on these thoughts while pinning the entire decision on Disney and ESPN.

“This whole thing has been a battle since Day 1. We’ve been fighting nonstop all day and all night since this pandemic started to put on this event on April 18. Today, we got a call from the highest level you can go at Disney and the highest level of ESPN.

“It’s been amazing partnership, ESPN has been very, very good to us and the powers that be there asked me to stand down and not do this event next Saturday. We’re ready to go.”

Following the postponement of virtually every major sporting league across the globe in mid-March, White was not deterred from the idea of forging ahead with UFC’s slate of events.

When staging events in front of crowds was no longer an option, he began to eye the possibility of hosting UFC 249 in an empty venue.

On April 1, UFC lightweight champion Khabib Nurmagomedov, who was set to face off against Tony Ferguson in the main event, announced he would remain in quarantine in Russia due to concerns with re-entering the country after the fight. White simply rolled with the punches and replaced Nurmagomedov with Justin Gaethje.

After all that, not even Wednesday’s announcement – that UFC strawweight Rose Namajunas was backing out of her co-main event rematch against Jessica Andrade because of two coronavirus-related deaths in her family – was enough of to get White to hit the brakes.

In the end, it took one of the biggest corporations in the world bringing the hammer down and saying no.

And even as White paid lip service to the health and safety of his fighters and staff, he couldn’t resist repeatedly stating that he could have staged the event if he were allowed to.

“First of all, health and safety is all we care about. It’s number one for the UFC – it has been for 20 years, long before the coronavirus popped up,” he said. “Number two, we figure out solutions, we figure out how to make things work, how to make it safe, how to make it happen. That’s why we’re the biggest and the best in the world. We pull off things that other people can’t.

“Everybody said that I couldn’t do this. I can do this. I can go next Saturday. And if anything ever happened to California where I couldn’t, I have another place right now, with an athletic commission, and the government and everybody’s behind it. I can go April 18, let’s make that clear.”

To his credit, White also pointed out that he plans to take care of his fighters and staff throughout the pandemic, whether they fight or not.

“I’m gonna take care of as many people as I possibly can and do whatever it takes to make these guys all feel comfortable. All my employees – nobody is getting laid off at the UFC. Everybody’s good. We will be the first sport back.”

White says he will achieve that by setting up his “Fight Island,” which he says is actively in the works.

“Fight Island is real. It’s a real thing,” White said. “The infrastructure is being built right now. That’s really gonna happen, and it will be on ESPN."

When pressed by Okamoto, White revealed a few more details about this audacious plan.

“All the infrastructure is being built right now and gettin’ put in place,” White said. “As we get closer to that, then I’ll start figuring out booking fights, gettin’ guys ready – plus I can ship guys over their earlier, and they can start training over there on the island.

“So once that’s all in place, you’re lookin’ at like, a month, and guys can start training. I’m sure people are gonna be ready to get out of their houses in another month and go to an island somewhere and train.”