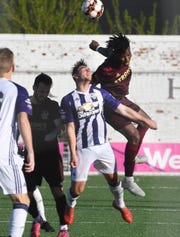 Detroit City FC's Abdoulaye Diop, seen here in May when the clubs met at Keyworth, had the winning goal in a 3-1 victory over Kalamazoo FC Saturday. (Photo: Daniel Mears, Detroit News)

AFC Ann Arbor, which clinched a playoff spot with Friday's 2-0 victory over Toledo Villa, will play Rochester in the first round on Tuesday at Concordia University.

Diop's thunderbolt in the 72nd minute put DCFC (10-1-3) on top. LeRouge's Max Todd converted a penalty kick in the 9th minute gave the visitors a 1-0 lead after Bakie Goodman was tripped in the box before Kalamazoo's Isaiah Nieves leveled it in the 25th minute.

Buono, who came on as a sub for leading scorer Shawn Lawson moments earlier, added an insurance goal in stoppage time as DCFC pushed its unbeaten run in league play to 12 matches (9-0-3).

The Midwest Region semifinals will take place July 19 with the host yet to be determined.