No. 2 Le Rouge, which is riding a 12-game unbeaten streak in league play, awaits the winner of No. 3 Minneapolis City S.C. vs. No. 4 Med City in a semifinal to be played on Friday at 7:30. 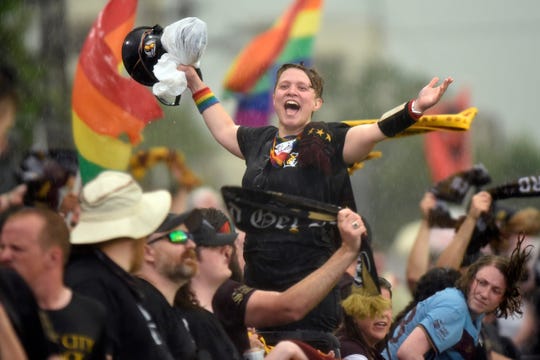 Detroit City FC will host the NPSL Midwest Region finals Friday and Sunday. No. 2 DCFC will play at 7:30 Friday against the winner of the quarterfinal between No. 3 Minneapolis City vs. No. 4 Med City. (Photo: Jose Juarez, Special to Detroit News)

No. 1 seed Cleveland will face the winner of No. 5 AFC Ann Arbor vs. No. 6 Rochester, which takes place 6:30 p.m. Tuesday at Concordia University. Kickoff for that semifinal on Friday is 4:30 p.m.

Tickets are $12 online at detcity.com or $15 at the gate. Weekend passes are available for $20.

DCFC (10-1-3) clinched the No. 2 seed with a 3-1 victory over Kalamazoo FC on Saturday. Max Todd, Abdoulaye Diop and Tommy Buono scored as Le Rouge avenged their only defeat in league play this season while extending their unbeaten streak to 12 matches (9-0-3).

DCFC also hosted the Midwest Region finals in 2017 when it advanced to national semifinals, where it lost Midland Odessa.