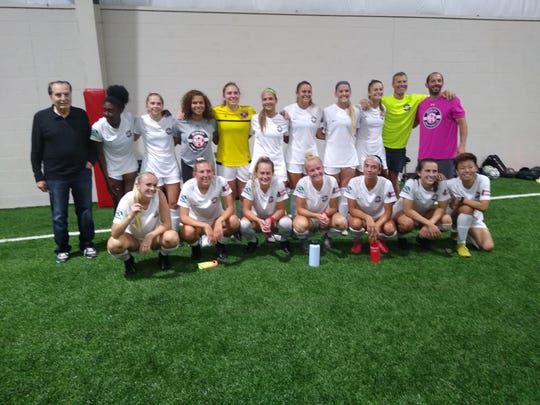 Washington Township — What started as a tense one-goal affair in the first 30 minutes evolved into a six-goal onslaught by Motor City FC, which beat Detroit Sun, 7-0, for the first women's Milk Cup on Tuesday at Total Soccer Sports Park.

Motor City FC receives a $7,500 prize as winners in the statewide knockout tournament sponsored by the United Dairy Industry of Michigan, which added a women's competition this year. Detroit Sun receives $2,500 as runner-up.

"It was 2-0 at halftime and over on the sideline we talked about how to up the tempo in that final third, and how to break them down, things that weren't working," Motor City coach Aaron Byrd said. "As a coach, it's things you always like to take credit for but it was just stuff that we talked and the girls executed right and we started finishing and started breaking them down in the way we talked about.

"That shows the girls are eager to listen, they're eager to learn and we ended up scoring five goals in the second half."

Detroit Sun, which plays in the United Women's Soccer circuit, held their own during the first half. The team had a goal called back on an offside. Five minutes into the second half, Rachel DeLuca's goal-bound shot appeared to enter inside of the goal.

Sun coach Skipper Mukhtar Jr. and DeLuca protested vehemently but the official waived play on. With the 2-0 score, a Sun goal could have changed the complexion of the match.

"The ball hit the net," Mukhtar said. "Even their players said it hit the net. It's fine. It happens."

Sun also had some spirited play from the back from Justine Lynn while goalkeeper Katelyn McEachern was better than the lopsided score reflected.

"They're good. They're very very good," Mukhtar said of Motor City FC. "The biggest difference is they bring in girls from all over the country and we bring in Michigan girls."