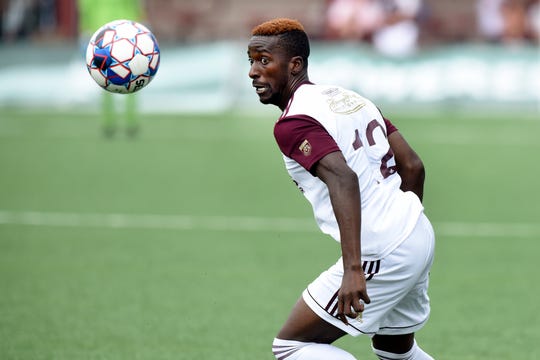 Hamtramck — Detroit City FC plays New York Cosmos B in a marquee match of unbeaten teams in Members Cup play this Saturday at Keyworth Stadium. And count on Le Rouge midfielder Tendai Jirira to be the pilot light burning on that hot stove of soccer competition.

The 5-foot-10 midfielder’s tireless work rate has been a constant through DCFC’s Members Cup run, which has seen Le Rouge go undefeated at 3-0. The first-place Cosmos (4-0-1) have played two more games than Detroit so far in the competition.

The Zimbabwe native joined DCFC midway during the club’s Great Lakes Conference championship run this season from the USL League 2 Cincinnati Dutch Lions where he played a handful of games.

Jirira announced his Le Rouge presence with a dazzling run, carrying the ball from the backline through to the offensive third before setting up Shawn Lawson for DCFC’s final goal in a 3-1 victory over AFC Ann Arbor July 7. The win clinched the division title and sent the Le Rouge to the postseason after a year’s absence.

His expansive jaunt came at the expense of his former club AFC Ann Arbor, whom he played with in 2017.

“He has a huge engine,” AFC Ann Arbor coach Eric Rudland said. “He plays with the same intensity day in and day out.”

"He trains hard everyday; He doesn't take any training sessions off," James said. "What you see in a game is what you see everyday with him. He's effective. He's strong."

Jirira, 27, calm demeanor also adds a veteran presence. He will need it Saturday as he'll likely be marking Cosmos midfielder Ansi Agolli, who has four yellow cards in 442 minutes of Members Cup play.

"He takes those sort of matchups personally," James said. "His attitude is first class with that."

Jirira, who played at NAIA University of Northwestern Ohio for four years (2013-16), has also been bestowed with wicked speed and a deft touch.

His left foot is quite lethal when it comes to delivering pin-point crosses. Jirira registered 13 assists at Northwestern Ohio, which made it to the 2014 NAIA national semifinals. Jirira had two assists in five matches during the NPSL regular season. He has started in all three DCFC Members Cup matches.

Jirira reflects on his “amazing journey,” which includes representing Zimbabwe at U14,  U15 and U17 levels. He is also a product of the Friendly Football Academy in Zimbabwe, which helps young players achieve their dreams of playing abroad.

The African country is rife with soccer talent, Jirira said. One path is for players to move to  South Africa’s Premier League with the hopes of eventually signing with a European club.

Jirira chose the U.S. college route. He earned his bachelor’s degree in business at Northwestern Ohio. The transition can be filled with fright.

“I was very nervous,” Jirira said. “I think there was the excitement of something every kid dreams of, coming to the U.S. or like going to Europe, and playing. I was very shocked. I came here and everything was very organized and more organized than I had anticipated.

"One thing I wasn't prepared for was the cold. I came right in the winter time, so it was really cold. I was able to see my first snow here. It was really awesome."