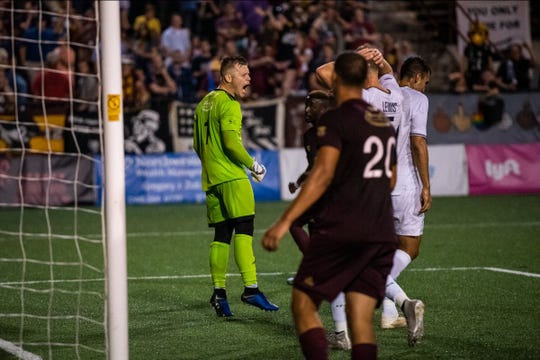 A pair of goals off set pieces left Detroit City FC and the New York Cosmos B mired in a 1-1 stalemate Saturday.

As a result, DCFC (3-0-1) didn't gain any ground on the first place Cosmos (4-0-2) in the NPSL Members Cup standings. Detroit has two games in hand and visits New York Saturday, Oct. 12, for the return leg.

DCFC couldn't take advantage after the visitors were reduced to 10 men in the 72nd minute when forward Isaac Acuna received a straight red card.

Acuna was sent off after he shouldered DCFC's Marcello Borges to the ground in an off-the-ball incident. His dismissal added drama to a rugged match, which also saw three yellow cards handed out.

Carroll headed in Danny Deakin's corner kick to give DCFC a 1-0 lead two minutes into the second half. Deakin's delivery managed to swerve through the 6-yard box and bounce before the Cork, Ireland native redirected it into the net.

Espinal, who was denied on a pair of bending free kicks by DCFC goalkeeper Nate Steinwascher in the first half, struck paydirt with a thunderbolt from 19 yards out in the 56th minute.

The Cosmos forward arched the ball around a six-man DCFC wall and into the upper-right corner of the net, giving Steinwascher no chance.

Steinwascher put on goalkeeping clinic in the first half.

The Honduran bent the first one from 20 yards around a four-man DCFC wall, which Steinwascher dove to his right to parry away.

Another foul set up Espinal again outside the box, where he curled the ball toward the back post, requiring Steinwascher to spring to his left to push it out of play as the half came to a close.

Steinwascher also denied Cosmos forward Aaron Dennis on a goal-bound shot in the 21st minute and later closed down the angle on Acuna who was bearing down on goal to force a corner.

The Cosmos controlled possession in the opening 15 minutes, showing their pedigree with well-designed set pieces and physical play.