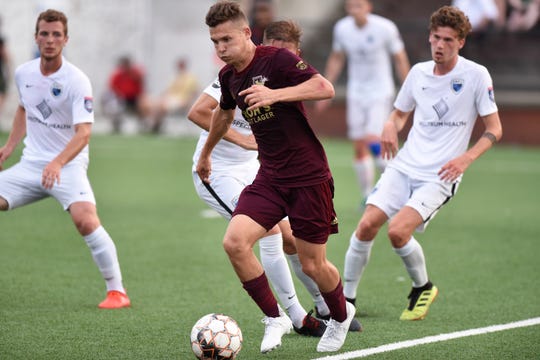 The victory also moves Le Rouge back into second place in the tournament over Chattanooga (3-3-2), whom Detroit faces next Saturday at Finley Stadium. Kickoff is 6 p.m. EDT.

DCFC welcomed back midfielder Bakie Goodman and Lawson, who both missed last week’s 1-1 draw against the Cosmos due to injuries.

Midfielder Cyrus Saydee unleashed Peterson with a 40-yard pass that sent him bearing down on the Napa Valley keeper. The former Rutgers standout placed the ball right between the goaltender’s legs for a 1-0 DCFC lead.

About 15 minutes later, an ill-advised back pass by Napa Valley’s Marco Reyes sent Matthews darting in on goal, prompting the keeper to pull the DCFC forward down in the box. Matthews converted the ensuing penalty kick with ease to give the home side a 2-0 advantage at intermission.

Lawson, who missed the Cosmos’ encounter with a hip flexor injury, side-footed on the half volley off a pass by Danny Deakin to administer the final blow. The goal was Lawson's first in Members Cup play.

Goodman, who sustained a leg injury in DCFC’s 1-0 victory over Milwaukee Sept. 14, earned Man of the Match honors.