The team captured the imagination of the community but couldn't turn back a determined Grand Rapids Forest Hills Northern side, which prevailed 2-0. 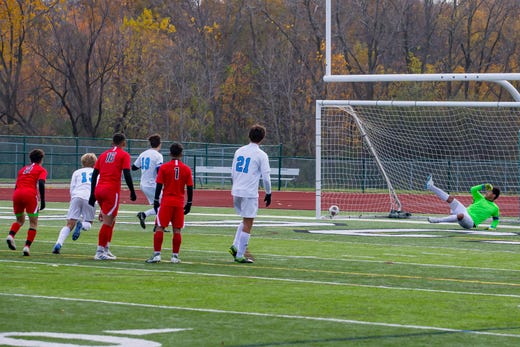 Melvindale's Zaid Ahmed (1) moves the ball up field next to GR Forest Hills Northern's Simon Scharich (7) during the first half. (Photo by Dave Reginek/Special to the Detroit News
Fullscreen 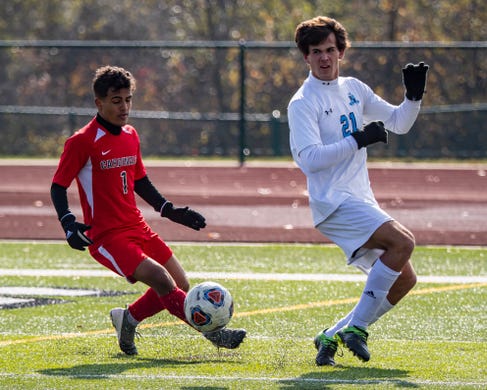 GR Forest Hills Northern's Andrew Kremer (21) passes the ball in front of Melvindale's Zaid Ahmed (1) during the first half. (Photo by Dave Reginek/Special to the Detroit News
Fullscreen 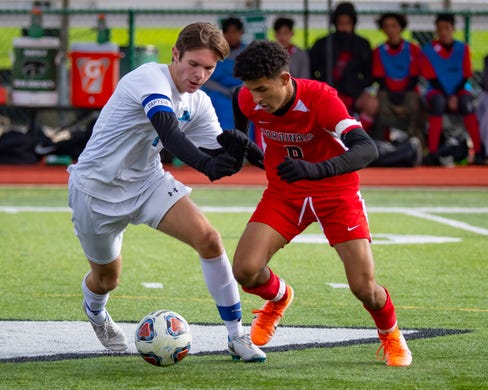 Melvindale's Saleh Said (6) battles for the ball with GR Forest Hills Northern's Simon Scharich (7) during the first half. Dave Reginek/Special to The Detroit News
Fullscreen 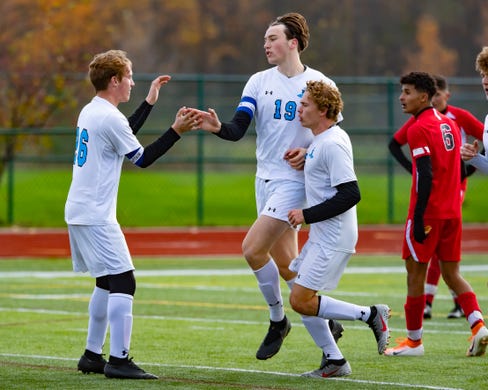 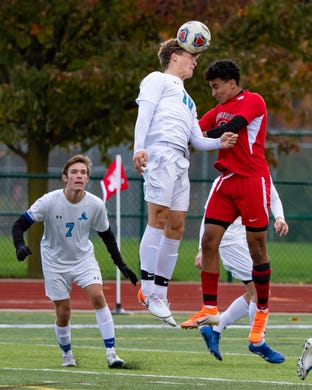 GR Forest Hills Northern's Ethan Jansen (10) heads the ball next to Melvindale's Mohsen Yahya (19) during the first half. Dave Reginek/Special to The Detroit News
Fullscreen 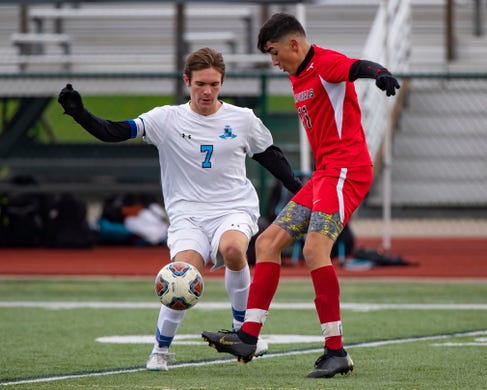 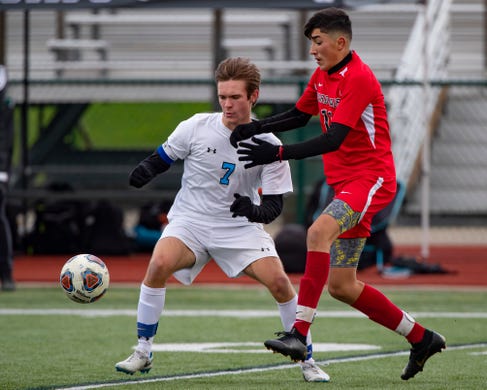 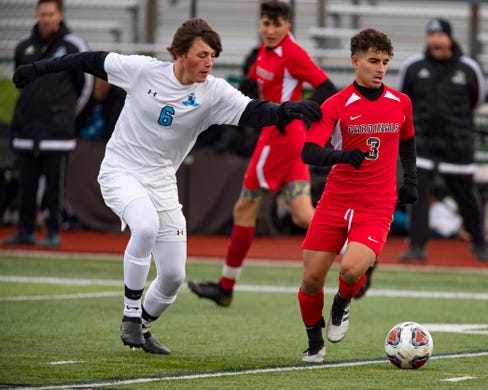 Melvindale's Alhusan Yahya (3) controls the ball in front of GR Forest Hills Northern's Carter Lindholm (6) during the first half. Dave Reginek/Special to The Detroit News
Fullscreen 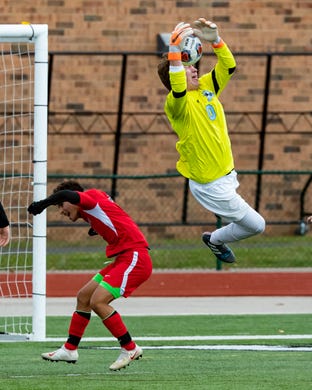 Forest Hills Northern's Carter Clark (0) makes a save in front of Melvindale's Alhusan Yahya (3) during the first half. Dave Reginek/Special to The Detroit News
Fullscreen 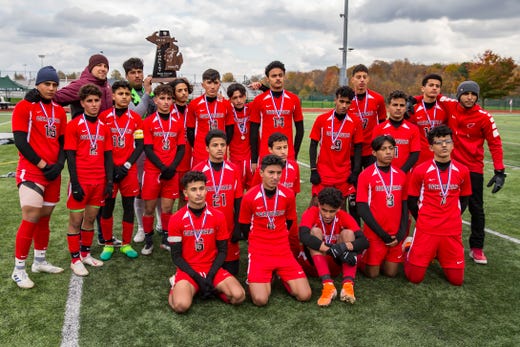 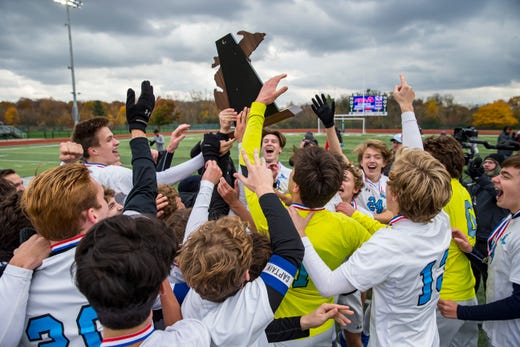 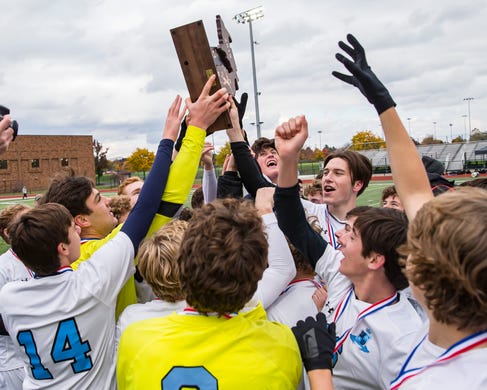 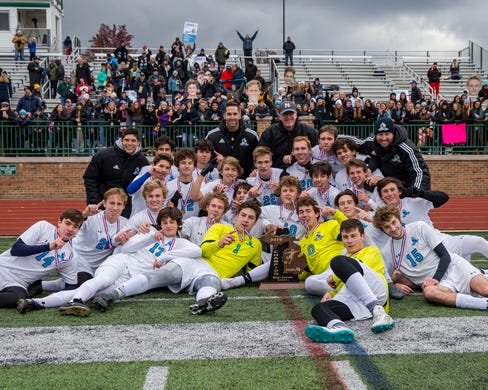 GR Forest Hills Northern poses for a team picture with the championship trophy. Dave Reginek/Special to The Detroit News
Fullscreen 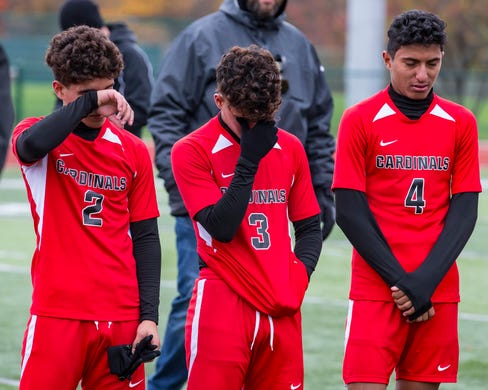 Novi — Julian Castillo was right about a lot of things on Saturday, guessing correctly when to be aggressive as Grand Rapids Forest Hills Northern crowded his goal area often with long throw-ins and other pressures during the Division 2 state soccer finals.

But the Melvindale senior goalkeeper may have been wrong when he said after the 2-0 loss that nobody remembers who gets the silver medal.

Melvindale (16-4-2) gave its fans and community a run to remember, reaching the state finals for the first time in any sport, ultimately falling short against a team that waited a long time to get to the top.

“We accomplished a lot and everything,” said Castillo, who plans on playing at Schoolcraft next season. “I wish we would’ve won the game, but I can pick my head up and say I’m happy to where we got.”

The 6-foot-2, 240-pound Castillo made eight saves and commanded the area in front of the Melvindale net brilliantly throughout.

“Best goalie in the state; I’ve said that before and I’ll repeat that if I have to,” Melvindale coach Tomas Belba said. “He’s great; great sportsmanship, great player overall. I wish him luck.”

However, Aidan O’Connor blasted a penalty kick past Castillo in the 20th minute for Forest Hills Northern, which had no titles but two previous state final losses. In addition, the girls program has not won a state title despite four straight final appearances and five in program history.

“Everyone knows we have a history of losing in the state finals, and it’s good to finally break that standard,” O’Connor said. “It was tough coming up with these guys last year and not getting the win.”

Then, shortly after Castillo came back into the game after injuring his left leg on an aggressive challenge, Ludwig Tilly gave Forest Hills Northern the clincher off a pretty pass from Nate Metcalf in the 60th.

“I didn’t want to have my last high school game end with me on the sidelines,” said Castillo, walking with a limp and his knee area wrapped after the game. “I wanted to play the game.”

“Once we go that one goal, I was pretty confident the game was in the bag,” said O’Connor, one of 14 seniors.

Melvindale was not able to sneak any of its four shots on goal past Forest Hills Northern goalkeepers Carter Clark and Jonathan Kliewer.

Melvindale had a goal disallowed late in the first half when Clark was fouled, and senior Alhasan Yahya had a quality opportunity thwarted by Kliewer less than a minute after falling behind 2-0.

“We put on the field what we had, and we left it there,” Castillo said. “I think we should be proud with how we played.”

Added Belba: “A good run, but we didn’t capitalize when we should’ve.

“We wanted to go all the way through, that’s why we play. We love this game, it’s a little bit say today, but it is what it is.

“We accomplished something great.”

After a scoreless first half, Andri Myftari scored for Athens, but Colin Blackport's goal with 13:51 left in regulation forced overtime.

Rishi Kalyan also scored in the second overtime in Comstock Park, and all-state senior goalkeeper Jason Kemp made seven saves for Todd Heugh's team, which had its undefeated season ended last year in the district final, but entered this year's postseason on a two-game losing streak.

Goalkeeper Adam Skehan made six saves for Grosse Ile (24-2-1), which got over the hump after reaching the state semifinals in four of the last six seasons.

Reese Bos scored for in the 89th minute to force overtime for South Christian (21-5-2), the first goal allowed by Grosse Ile in seven postseason games for coach Jon Evans.

Jameson Goorman made nine saves in regular play and made it stand in the shootout for Western Michigan Christian (19-2-3) in their seventh state championship. The champions allowed one non-shootout goal in the postseason for coach David Hulings.

Goalkeeper Sam Sword had eight saves for University Liggett, which ended the season at 18-3-1, falling one win short of the program's fifth state title.