The 6-foot-4 netminder started 15 matches this season, posting a superlative 0.78 GAA while earning Big Ten goalkeeper of the year honors.

Michigan goalkeeper Andrew Verdi was selected in the third round, 65th overall, by DC United on Monday in the second phase of the 2020 MLS SuperDraft.

Verdi joins Jack Hallahan (LAFC, second round, No. 50 overall) as Wolverines selected in this year's MLS draft, which concluded with rounds three and four by teleconference Monday. Rounds Nos. 1 and 2 took place Jan. 9. 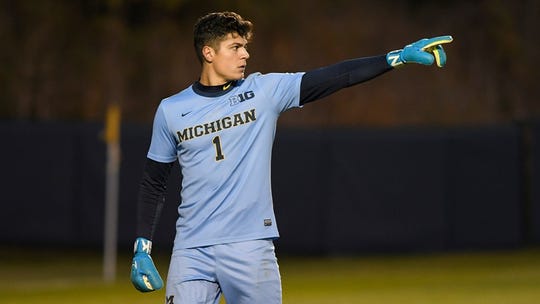 Michigan's Andrew Verdi was second in the third round, No. 65 overall, by DC United in the 2020 MLS SuperDraft. (Photo: University of Michigan)

Verdi started 15 matches this season for UM before being sidelined for the remainder of the season by injury in overtime against Wisconsin Oct. 25. Despite an abrupt end to his season, he was still named Big Ten goalkeeper of the year, posting seven shutouts with a school-best 0.78 goals-against average.