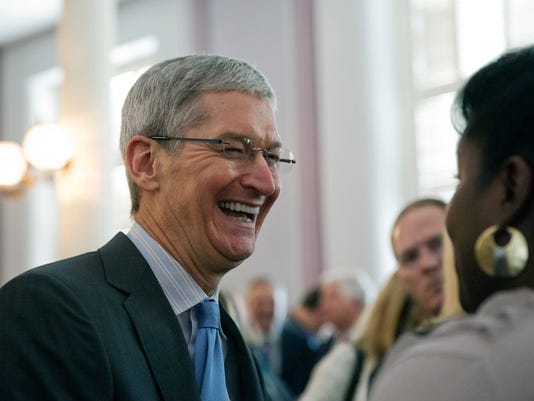 “We’re already No. 1. We’re more than the total of the other guys,” Cook boasted Monday during a tech industry conference, “and we’ve only been at it a week.” He said Visa and MasterCard officials have told Apple that the Apple Pay system is already seeing more use than similar “contactless” methods of paying for purchases.

While Apple has partnered with major banks and large retail chains including Macy’s Inc., Walgreen Co. and McDonald’s Corp., critics have noted that it’s not accepted by a number of other large chains. Among them are the drugstore chains CVS Caremark Corp. and Rite Aid Corp., which belong to a retail coalition working on a rival system.

Cook also said he plans to talk with Jack Ma, executive chairman of the Chinese e-commerce giant Alibaba, later this week about a possible partnership, although he offered no details. Ma told the same audience earlier Monday that he would be “very interested” in teaming with Apple to bring Apple Pay to China.

Ma and Cook spoke during separate appearances on an outdoor stage on the opening night of a three-day tech conference organized by The Wall Street Journal.

Responding to questions, Cook also said he expects Apple’s iPhone will continue to be the company’s biggest-selling product, contributing the majority of Apple’s revenue and profit, for the next few years. But he boasted that sales of Apple’s Mac computers are growing faster than the overall personal computer industry, which has struggled in recent years.

He also touted the upcoming release of an Apple smartwatch and dropped broad hints about Apple’s work on a new television product, which has been rumored for years.

Today’s televisions haven’t advanced much technologically in the last 30 years, Cook said. “So I think there’s a lot to be done here.”

Cook didn’t offer specifics, but he said, “It’s an area where I’m optimistic that there is something great that can be done in the space.”

Apple started operating its new digital payments service last week, offering it only in the United States to start, and only for users of its newest models of iPhones and iPads. The company has touted the privacy and security features of its service, which uses a sophisticated encryption system to let users charge purchases on credit card accounts without having to show their card or account number.

Repeating a favorite dig at competitors such as Google and Facebook, Cook said Apple doesn’t collect user data or purchase information. “We don’t want to know what you buy. We’re not Big Brother; we’ll leave that to other people.”

Speaking earlier, Ma said he is looking for a variety of U.S. partners for Alibaba Group, the Chinese firm that held a record stock market debut on Wall Street earlier this year. Ma said he is visiting Hollywood film studios this week to discuss potential deals, because “China will be the largest movie market in the world” in the next 10 or 15 years.