Competition to develop self-driving cars heats up between U.S. and China 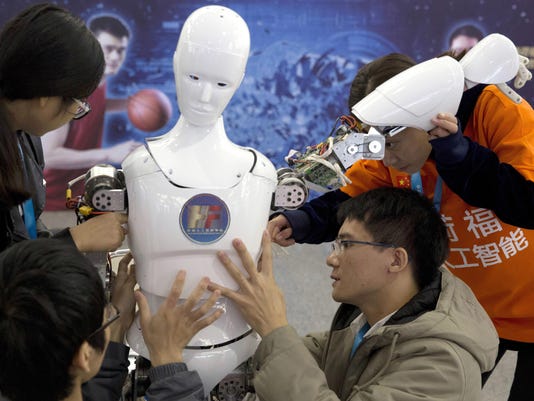 In this Oct. 21, 2016, file photo, Chinese students work on the Ares, a humanoid bipedal robot designed by them with funding from a Shanghai investment company, displayed during the World Robot Conference in Beijing. China's government announced July 21, 2017, a goal of transforming the country into a global leader in artificial intelligence in just over a decade.(Photo: Ng Han Guan / AP)

Washington — China’s government has pledged to work toward becoming a global leader in artificial intelligence by 2030, raising concerns about competition with developers of self-driving cars in the United States.

Communist leaders see artificial intelligence as key to making China an “economic power,” according to a Chinese Cabinet statement Thursday. It calls for developing skills and research and educational resources to achieve “major breakthroughs” by 2025 and make China a world leader by 2030.

Artificial intelligence is a field along with renewable energy, robotics and electric cars where communist leaders hope to take a lead and help transform China from a nation of factory workers and farmers into a technology pioneer.

U.S. Rep. Debbie Dingell, D-Dearborn, says China could upend the race to develop self-driving cars if federal regulations are not put in place to allow widespread testing on domestic roads.

“Automated vehicles are going to be developed whether we like it or not,” she said in a statement. “The question is whether the United States will remain in the driver’s seat as opposed to China, Japan, or even the EU who are all making significant investments in this space.”

Dingell is a member of a House committee that is developing a bill that would allow flexibility across state lines for testing autonomous vehicles.

Artificial intelligence is an emerging field along with renewable energy, robotics and electric cars where communist leaders hope to take a lead and transform from a nation of factory workers and farmers into a technology pioneer.

They have issued a series of development plans over the past decade, some of which have prompted complaints that Beijing improperly subsidizes its technology developers and shields them from competition in violation of its free-trade commitments.

Michelle Krebs, senior analyst for Autotrader, said China’s announcement likely will have a ripple effect in the U.S. debate about self-driving cars.

“Because of the size of China and the size of the Chinese auto market, this could be a tipping point for autonomous vehicles if they decide to go that way,” she said.

“Automotive is such a huge part of any economy. Anything China does in that regard is going to affect us. Our automakers who are doing business over there will have to adjust to them – and if they start selling cars elsewhere, that will also be a challenge.”

Krebs said China has already made large investments in electric vehicles, and will likely see autonomous cars as a perfect complement as they look to combat congestion and pollution.

She added that self-driving car developers in China will likely have to jump through fewer regulatory hurdles than their U.S. counterparts will: “If you’ve ever been to China, if they decide to build a highway, it gets built.”

Thursday’s statement gives no details of financial commitments or legal changes. But previous initiatives to develop Chinese capabilities in solar power and other technologies have included research grants and regulations to encourage sales and exports.

Alexandre Marian, a director in the automotive and industrial practice at AlixPartners LLP, a global consulting firm, said China’s entry into the autonomous vehicle arena “makes the space even more challenging.

He predicted there will be a lot of entries into the self-driving arena before the autonomous cars hit the road in large numbers, but said “there will not be a lot of winners in the space.”

Marian believes U.S. companies will have competitive advantages and some innovation advantages, despite monetary support by the Chinese government. However, he quickly added: “They should take them seriously.”

“China has a lot of means and capital to invest and their government is backing them,” Marian said. “...This is serious and it’s really a signal that they want to work on it.”

China has had mixed success with previous strategic plans to develop technology industries including renewable energy and electric cars.

Beijing announced plans in 2009 to become a leader in electric cars with annual sales of 5 million by 2020. With the help of generous subsidies, China passed the United States last year as the biggest market, but sales totaled just over 300,000.