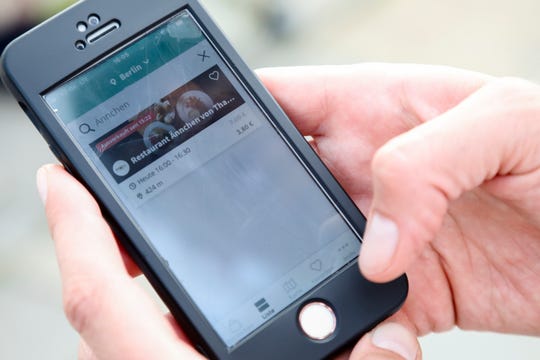 Annekathrin Fiesinger shows how to use the food sharing app 'Too Good To Go' to reduce food waste. (Photo: Markus Schreiber, AP)

Berlin – After a long day at work, Annekathrin Fiesinger is too tired to consider making dinner at home. So the 34-year-old uses her smart phone to check nearby restaurants, hotels or bakeries in Berlin for food being sold for a discount at the end of the day.

The part-time coffee shop worker, who is also studying for a degree in the science of ecosystems, is part of a growing movement of environmentally-aware people in Germany and beyond who are using apps to reduce food waste and try to cut down on climate-wrecking carbon emissions.

While it’s unclear how big an impact such efforts have in ultimately reducing emissions, they reflect how environmental concerns are growing and shaping the behavior of consumers and businesses.

“For me this is all about the environment,” says Fiesinger. “We cannot go on with all this wastefulness.” 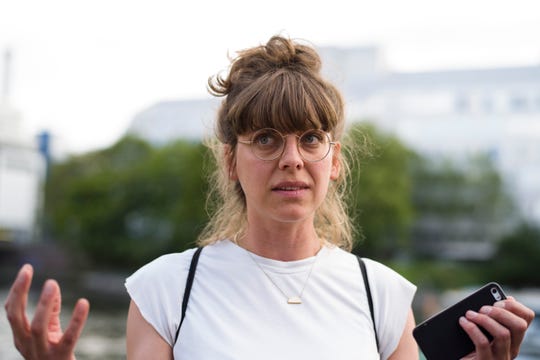 Annekathrin Fiesinger talks about her motivation to use a food sharing app to reduce food waste. (Photo: Markus Schreiber, AP)

Fiesinger uses “Too Good To Go,” Europe’s most popular app to find discounted unsold food. It uses her phone’s GPS to tell her which registered businesses nearby have extra food for sale, and what they’re offering.

“It’s super easy: just download the app and, on your way home, pick up what you like best,” she explained, scrolling through a long list of photos advertising veggie meals, baked goods and unsold lunch specials.

The app is part of a growing number of services using technology to help reduce food waste.

Activists have built online communities to share food with neighbors before throwing it away. Startups have teamed up with supermarkets to create applications that alert consumers when groceries that are about to expire are marked down. Even the German government has launched a phone app offering recipes by celebrity chefs made specifically for left-over groceries that often get discarded.

On average, every German throws away more than 55 kilograms (120 pounds) of food a year, the government says. That’s about 11 million tons of food annually, which creates six million tons of carbon dioxide emissions that contribute to global warming. Globally, about one third of all food ends up in the garbage.

Emissions come from burning the wasted food but also from producing the food in the first place. For example, cattle raised for beef and milk are the animal species responsible for the most emissions, representing about 65% of the livestock sector’s emissions, according the U.N.

Scientists say the only possible way to slow down global warming is by drastically reducing the emissions of greenhouse gases such as carbon dioxide in the coming decades. Doing so means ending the use of fossil fuels and cutting back on other sources of emissions, such as intensive land use for agriculture.

The German government has said it wants to reduce food waste by half until 2030 and Chancellor Angela Merkel called on all citizens to support initiatives that help avoid food waste.

“I think that every single person can contribute to this big goal,” Merkel said during her weekly podcast in February. “Digitization can help with intelligent packaging and (online) platforms via which one can then share food.” 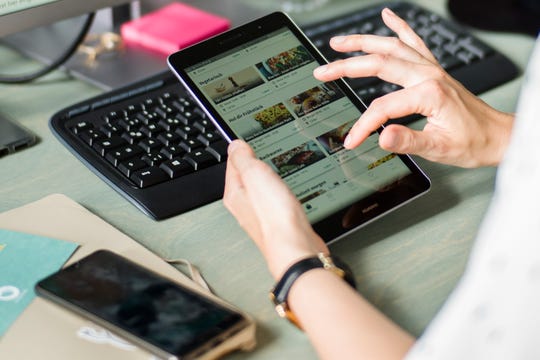 The “Too Good To Go” app, which was created by a couple of Danish entrepreneurs in 2015, has seen its number of users grow rapidly. More than 5,000 people download the app in Germany every day, a spokeswoman for the company says. It’s also available in ten other European countries including Denmark, France, Britain and Poland.

“So far, we have rescued 14 million meals in Europe from being thrown away – that equals 35,000 tons of CO2 that have been saved,” spokeswoman Franziska Lienert said.

Evaluating the actual impact of those saved meals can be tricky, as the consumers would have likely bought food from another retailer instead. But food sharing programs and apps can help better match demand for meals to their supply, increasing the industry’s overall efficiency.

Ten million people use “Too Good To Go” and some 23,300 food businesses participate, Lienert said. It’s the most popular, but other food sharing apps include FoodCloud, Karma or Olio which is available in hundreds of cities in the United States.

To make a profit, “Too Good To Go” keeps 1.09 euros ($1.22) per meal sold through the app. The food is usually about 50% less expensive than its original price.

Like Fiesinger, most of the app’s users are university students and young, tech-savvy professionals.

While a growing number of businesses are participating in such app-based schemes, many others still give their unsold food for free to charities that distribute it to the homeless or other people in need.

Whereas unsold food in Germany usually ends up in the garbage, France and the Czech Republic have in recent years implemented laws banning supermarkets from throwing away food and instead ordered them to donate it to charities and food banks.

In Berlin, Fiesinger checks her phone for food offered in her neighborhood.

She decides on a lunch special at Aennchen von Thorgau restaurant on the banks of the Spree river. She clicks on one of four unsold pasta dishes, ordering and paying automatically.

“In Berlin, it’s really easy to find something – there’s something waiting for you on every corner,” says Fiesinger on her way to pick up her meal. 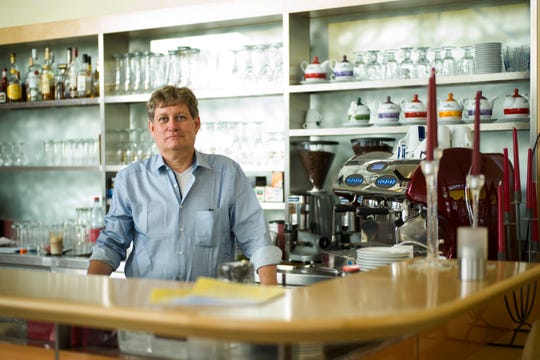 Armin Doetsch owner of the restaurant Aennchen von Thorgau, participates in a food sharing program via the App 'Too Good To Go' for ecological reasons. (Photo: Markus Schreiber, AP)

“We often have left-overs from our lunch specials,” Doetsch said. “Rather than tossing it, we prefer to give it away, even if it’s only for little money.”

He piles a dish of Spaetzle pasta with mushrooms – marked down to 3.80 euros from 6.50 euros – into a container Fiesinger had brought along and hands it over with a smile.

“We also want to avoid extra packaging waste,” says Doetsch. “Everybody who brings along their own Tupperware box gets free ice-cream as a reward.”

Frank Jordans in Berlin and Karel Janicek in Prague contributed to this report.