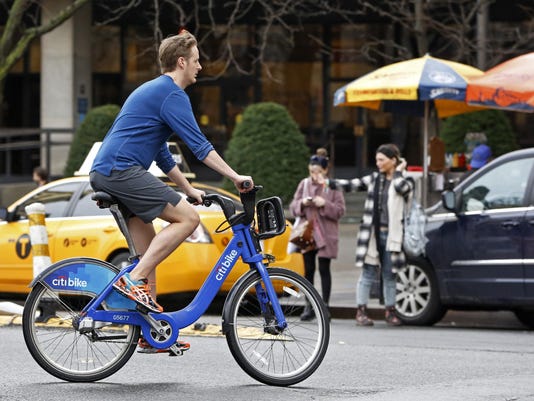 In this Dec. 24, 2015 file photo, a cyclist wearing shorts, sneakers and no socks, rides a rental bike through a downtown Manhattan street on Christmas Eve, in New York, as warm temperatures, rising into the 70's in New York.(Photo: Kathy Willens / AP)

Washington — Global warming has mostly made the weather more pleasant for Americans over the last 40 years, which may explain why much of the public doesn’t rank climate change as big a threat as do scientists and the rest of the world, a new study suggests.

But that perceived benefit of global warming — mostly milder winters — will soon be outweighed by more oppressive summer heat, according to a study in the journal Nature that’s dividing the scientific community.

“Americans are getting the wrong signal from year-round weather about whether they should be concerned about climate change,” said study lead author Patrick Egan, a public policy professor at New York University. “They’re getting the good parts and haven’t had to pay the price of the bad part.”

At least, not yet.

If heat-trapping gases aren’t controlled, nearly nine out of 10 Americans will have noticeably worse weather — not better — by the end of the century, especially in the summer, the study found.

To try to understand America’s reluctance to tackle climate change, Egan and Megan Mullin, an environmental policy professor at Duke University, created a weather preference index for Americans based on past studies that look at where people move, taking employment and other factors into account. It is essentially calculated on where people choose to live.

And all things being equal, the average American prefers the weather to be warmer in the winter and less hot and humid in the summer. In other words, Miami, San Diego and Phoenix, which topped the chart of the new index. At the bottom are Pittsburgh, Cleveland and Detroit.

Over the past 40 years, America’s weather has trended closer toward Miami than Pittsburgh.

“For the average American, the daily weather has gotten better,” Mullin said. They like going coatless in December, as many did this past year.

America “may have been lulled into complacency when it comes to the impacts of climate change,” said Penn State climate scientist Michael Mann, who wasn’t part of the study but called it a solid analysis. He and other scientists said the study raises interesting points, but climate change has other major impacts on people. It can trigger droughts, floods and heavy rainfalls; increase sea levels; make food and water scarce; and spread insect-borne diseases.

Other scientists dismissed the study. Matthew Nisbet, who studies climate communications at Northeastern University, said it was seriously flawed. He said looking at where people live is a not a good indicator of the weather people prefer.

“People moved from New Orleans because of Katrina, not because they thought Houston, Dallas or Oklahoma City had better evening temperatures,” McPherson said.

Mullin and Egan said their study could not incorporate the effect of extreme weather on people’s preferences, adding that a key message is that scientists should talk more about extreme weather than average temperatures.

According to Kevin Trenberth, climate analysis chief at the National Center for Atmospheric Research, hot summers are more of a problem than the study suggests. The fires, droughts and heat waves of a record hot 2012 cost $75 billion. In an email, he added: “It is unconscionable to say the climate has improved when the only reason is because one can use air conditioning.”