Digging has unearthed the charred ruins of an early 3rd-century building and the 1,800-year-old skeleton of a dog 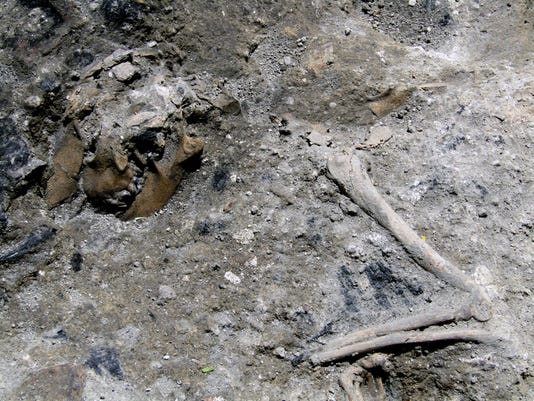 This photo made available June 26, 2017, by the Italian Culture Ministry, shows part of the 1,800-year-old skeleton of a dog, which apparently perished in a blaze in Rome.(Photo: AP)

Rome — Digging for Rome’s new subway has unearthed the charred ruins of an early 3rd-century building and the 1,800-year-old skeleton of a crouching dog that apparently perished in the same blaze that collapsed the structure.

Archaeologists on Monday said they made the discovery on May 23 while examining a 33-foot-deep hole bored near the ancient Aurelian Walls as part of construction work for the Metro C line.

“A Pompeii-like scene” was how the Culture Ministry described the findings that evoked comparisons to the inhabitants trapped by the 79 A.D. Vesuvius volcanic explosion and preserved for centuries in the ruins of Pompeii.

“The fire that stopped life in this environment allows us to image life in a precise moment,” said Francesco Prosperetti, in charge of Rome’s archaeological ruins and excavations.

Experts say the Rome ruins might be from an aristocrat’s home at the foot of the nearby Celian Hill or from a nearby military barracks, which itself had been explored in other excavations for the subway line.

One of the reasons Rome has such a limited subway system for a metropolis is that construction of an underground transport line inevitably reveals layers of what had been buried slices of life from one of the ancient world’s most important capitals.

In this dig, items found included a leg of a stool or table; another one, more massive, possibly from a wooden trunk; a small table; a larger table; a wooden railing or handrail; frescoed wall fragments — with a reddish hue; and black-and-white mosaic floor tiles on the upper story of the collapsed building. They offer clues to how Romans then lived, as well as how they constructed their buildings, in what’s called the mid-Imperial period of the former Roman Empire.

The archaeologists said the fire hardened the artifacts, giving them a quality of preservation that is rarely found.

“For the moment, the discovery of a charred, wooden ceiling represents a unique event for the city of Rome,” the ministry said.

On the ground floor, segments of brickwork of a wall, decorated with frescoes, date to the era of Emperor Septimius Severus, whose rule spanned the end of the 2nd and start of the 3rd centuries, according to the archaeologists.

The dog’s remains include part of a jaw with intact teeth, with the skeleton indicating a crouched position, at the door of the house, and indicate the animal apparently became trapped in the building when it caught fire.