Some flowers create blue halo to say hello to bees

Bees are drawn to the color blue, but it’s hard for flowers to make that color with pigment

Some flowers create blue halo to say hello to bees 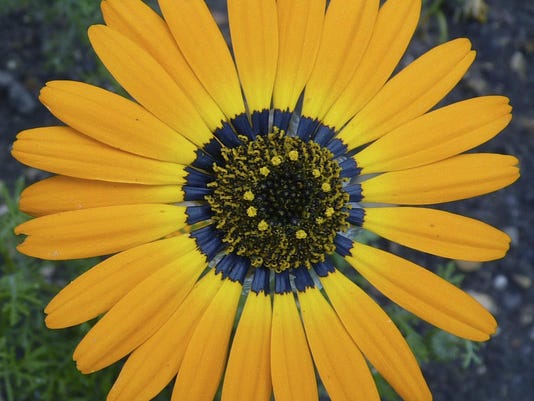 This photo shows an Ursinia speciosa flower. The region at the base of the petals contains a dark pigment but appears blue at certain angles due to an optical effect on the surface of the cells. The color makes flowers more visible to the bees.(Photo: Edwige Moyroud / AP)

New York — Some flowers have found a nifty way to get the blues.

They create a blue halo, apparently to attract the bees they need for pollination, scientists reported Wednesday. Bees are drawn to the color blue, but it’s hard for flowers to make that color in their petals.

Instead, some flowers use a trick of physics. They produce a blue halo when sunlight strikes a series of tiny ridges in their thin waxy surfaces. The ridges alter how the light bounces back, which affects the color that one sees.

The halos appear over pigmented areas of a flower, and people can see them over darkly colored areas if they look from certain angles.

The halo trick is uncommon among flowers. But many tulip species, along with some kinds of daisy and peony, are among those that can do it, said Edwige Moyroud of Cambridge University in England.

In a study published Wednesday by the journal Nature, Moyroud and others analyze the flower surfaces and used artificial flowers to show that bumblebees can see the halos.

An accompanying commentary said the paper shows how flowers that aren’t blue can still use that color to attract bees. Further work should see whether the halo also attracts other insects, wrote Dimitri Deheyn of the Scripps Institution of Oceanography in La Jolla, California.