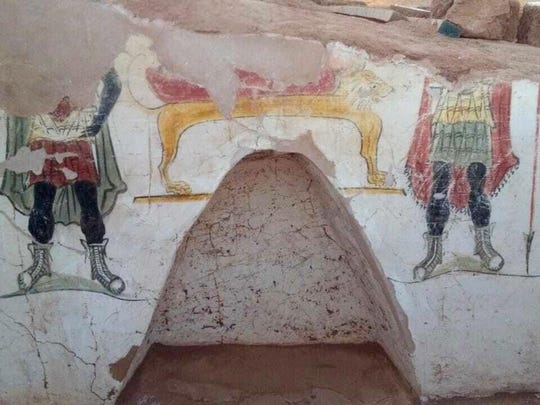 This undated handout photo from the Egyptian Antiquities Authority shows colorful funeral paintings in an ancient tomb dating back to the Roman period, at the Dakhla Oasis in the Western Desert, Egypt. (Photo: AP)

Cairo – Egypt says archaeologists have uncovered two ancient tombs dating back to the Roman period in the country’s Western Desert.

The Antiquities Ministry says Tuesday the excavations took place in the Beir Al-Shaghala archaeological site in the Dakhla Oasis.

Mostafa Waziri, secretary general of the Supreme Council of Antiquities, says the tombs were built in mud-brick with different architectural styles.

He says archaeologists uncovered ancient human remains and pottery fragments inside the tombs. They also found colorful funeral paintings on the walls of both tombs.

In recent years, Egypt has heavily promoted new archaeological finds to international media and diplomats in the hope of attracting more visitors to the country. The vital tourism sector has suffered from the years of political turmoil since the 2011 uprising.