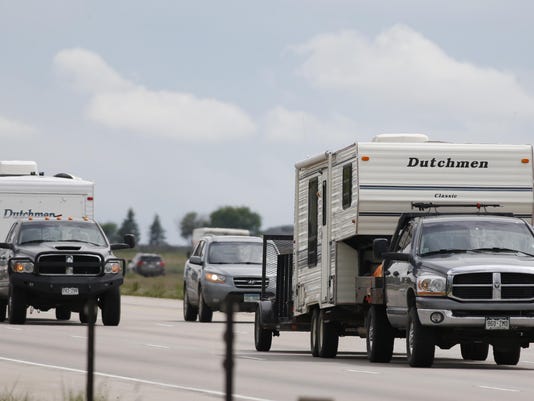 In this May 27, 2016, file photo, motorists guide their vehicles northbound on Interstate 25 to mark the start of the Memorial Day weekend near Firestone, Colo. Suddenly road trips are trendy again. Surveys from MMGY, Ford and AAA show their popularity is up. Websites, newspapers, magazines and even books are featuring road trips like they're the next big thing _ even though they're actually a longstanding American tradition.(Photo: David Zalubowski / AP)

Surveys show they’re on the rise. Websites, newspapers, magazines and even books are featuring road trips like they’re the next big thing – even though they’re actually a longstanding American tradition steeped in nostalgia and pop culture, from the 1950s Beat Generation literary classic “On the Road” to the 1983 comedy movie “National Lampoon’s Vacation.” On Instagram, the hashtag #roadtrip shows up 37 million times.

In some ways, the comeback of this 20th century-style vacation is surprising in an era when “time has become more far more precious than money, a priceless commodity not to be squandered lumbering along down endless miles of highway,” writes Richard Ratay in his upcoming book, “Don’t Make Me Pull Over!: An Informal History of the Family Road Trip.”

In other words, why spend 18 hours driving 1,200 miles when you could get there in two hours by plane?

Well, here’s why: flying is expensive, and the more people taking the trip, the cheaper it is to pile everyone in a car (instead of buying airfare for a family of four).

Flying is also unpleasant. Getting to the airport, allowing time for security, dealing with delays and baggage can easily turn a two-hour flight into a trip that sucks up most of your day and all of your soul. For some travelers, it’s more appealing to get up early, hit the road and spend all day driving. At least you can bring more than one bag without paying extra. And you can stop where you want, when you want.

So is the summer of 2018 the summer of the road trip? Here are some insights into why it might be, along with some resources for planning your own road trip.

MMGY Global’s 2017-18 Portrait of American Travelers found road trips represented 39 percent of vacations taken by American travelers in 2016, up from 22 percent in 2015. The top reason cited for taking road trips: the ability to make stops along the way.

Other reasons (besides lower costs and avoiding air travel) include the ease of taking pets along and the ability to make plans last-minute.

One surprise finding: The resurgence in road trips is “led by millennials,” said Steve Cohen, senior vice president, travel insights, MMGY Global. “When we look at the total number of road trips, there were more taken by millennials than any other generation.” And even though they’re young, nostalgia plays a role. Millennials are remembering trips they took “when they were kids, which wasn’t that long ago,” Cohen said.

The price of gas, by the way, matters less than you might expect. A recent AAA survey concluded that even though gas costs more now than at any time since 2014, that’s not keeping people home. AAA also said road trips were the most popular option for family vacations in their survey.

Another report, this one from Ford, called “The New American Road Trip(pers): How ‘Digital Nomads’ and Technology Blur Work and Play,” found 50 percent of those surveyed said road trips are more appealing than other forms of travel like air, cruise and trains because you can be “more spontaneous” when you’re driving.

Road trips are getting a lot of attention lately from print media and the publishing industry.

The New York Times ran a story earlier this year headlined “The Great American Road Trip: Shorter and More Popular Than Ever.” The cover story in the summer issue of Lonely Planet’s magazine is titled, “Our favorite road trips: Ireland, Alberta, Botswana, North Carolina, Texas, Australia and more.” The Wall Street Journal called van trips “the latest luxury getaway,” while a recent coffee-table book, “Van Life: Your Home on the Road,” by Foster Huntington, grew out of the author’s three-year adventure traveling around North America in a Volkswagen van.

Skift.com, the travel industry website, just completed a three-part series called “The Future of American Road Trips,” stating that road trips are “statistically on the rise due to both economic and cultural factors.” New technology like mobile mapping services, the ability to research and book lodging and tours as you go, and options for working remotely have also made it easier for people to hop in their cars and head out.

A colossal 960-page book published in May called “The Road Trip Book: 1001 Drives of a Lifetime,” edited by Darryl Sleath, describes road trips all over the globe, from South Africa’s Chapman’s Peak Drive to California’s Pacific Coast Highway to the Pamir Highway from Afghanistan to Kyrgzystan. Many of the trips are accompanied by digital route outlines that can be explored with GoogleMaps.

Chevrolet worked with a data scientist, Randy Olson, to calculate the most efficient road trip route around the U.S., with one family-friendly stop in each of the 48 contiguous states. It would take 214 hours (around nine days) of nonstop driving to complete the entire 13,000-mile route. The itinerary ranges from Disneyland in Anaheim, California, to national parks like the Grand Canyon and Yellowstone, to the Gateway Arch in St. Louis, the Rock and Roll Hall of Fame in Cleveland, Lake Champlain in Vermont and the Georgia Aquarium in Atlanta. Here’s an interactive map of the route: http://rhiever.github.io/optimal-roadtrip-usa/chevrolet-family-road-trip-national.html .