Beyond Yosemite: State parks to seek out off the beaten vacation path

Many of these state parks are often overlooked in favor of their national counterparts, and that is a shame.

Beyond Yosemite: State parks to seek out off the beaten vacation path

The government shutdown earlier this year brought with it many hardships for millions of Americans who depended on those missing pay checks to feed and clothe their families. On a less drastic note, it also brought — among a laundry list of other things — the closure of the country’s national parks.

That meant a not-open-for-business sign on majestic Yosemite and Yellowstone; on the exotic Everglades and the stark Death Valley; on the spectacular Grand Canyon and Mammoth Cave.

And while assuredly, these closures didn’t impact the public like the loss of wages, they represented a significant loss to the nation’s psyche.

This started me thinking of what would happen if such a catastrophe occurred again, and while I fervently hope it doesn’t, there is a travel alternative.

The United States has (as of a recent survey) 8,565 state parks, ranging in diversity from New York’s Niagara Falls State Park, the nation's oldest, to Little Jerusalem Badlands State Park in Kansas, the newest (opening later this year). Many of these gems are often overlooked in favor of their national counterparts, and that is a shame. Following is a roundup of five of my favorite state parks.

Some years back on a visit to Hawaii’s Big Island, I took a guided hike to Akaka Falls, a state park on the northeastern coast, equally known for its dramatic scenery and for a strange natural phenomenon.

Located near the city of Hilo, it is one of the wettest places on earth, with an average rainfall of 200 inches annually. As I carefully maneuvered my way down a loop trail through the rainforest to arrive at Akaka Falls — plunging 442 feet into a tranquil pool — I marveled at hibiscus the size of dinner plates and orchids in rainbow hues.

It was beauty at its most extravagant, but perhaps the thing that makes the Falls unique is something I didn’t see — the tiny goby fish which live in the Pacific Ocean, but come here to spawn in the stream above the Falls.

Since they wash back out to the Pacific when they hatch and mature, goby fish must make the journey from ocean to the top of the falls every time they procreate. This makes Akaka Falls the only state park to feature rock-climbing fish.

Speaking of rocks, from the charming community of Morro Bay rises an unlikely slab of rock that has become a symbol of this part of the California coast.

The result of lava from an underwater volcano reaching the surface, it is just one in a chain of volcanic peaks that runs along the Central Coast.

Once an island, Morro Rock is today connected to the mainland by a thread of sand, allowing visitors an up-close view of the marine preserve and its native wildlife. Otters and sea lions bask on the jetty; pumpkin orange sea stars are visible in the clear water and cormorants and gulls circle above the rock.

The latter’s squealing every morning served as my wake-up call. Enjoy the birds’ raucous cries but take note: the fragile habitat makes climbing the rock illegal, so don’t try it.

This former military camp, which was in operation from 1873 until the end of World War II, was established to protect the Red Cloud Indian Agency and to oversee the Sioux Reservation. Its distinguished past has included many famous names. Walter Reed was once the post surgeon; Arthur MacArthur (father of Gen. Douglas) served here, and Buffalo Bill Cody frequented the fort during his time as an Army scout.

But if there’s one name indelibly linked with Fort Robinson, it’s that of Crazy Horse, the Lakota Sioux warrior who waged relentless battle against the white soldiers. Upon his eventual surrender, he was brought here and imprisoned in a guardhouse. On Sept. 5, 1877, he was killed by a bayonet thrust from a sentry tasked with guarding him.

A replica of that guardhouse can be seen on a tour of the 22,000-acre fort/state park. Better yet, visitors can spend the night in the former quarters of enlisted men and officers, making it a great base for exploring area attractions, including the Crazy Horse Memorial, about an hour’s drive across the state line in South Dakota’s Black Hills. 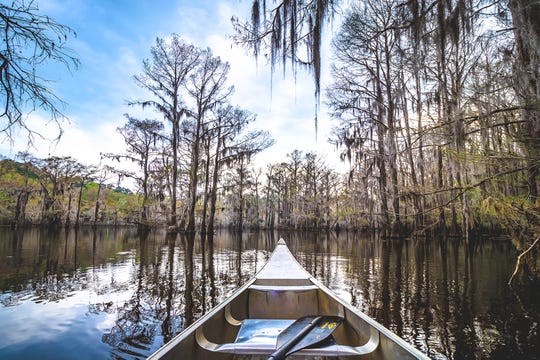 Caddo Lake State Park is a 25,400-acre mosaic of swamps, ponds and bayous, and is the only natural lake in Texas. (Travel Texas/TNS) (Photo: Handout, TNS)

Those who think Texas is all wide-open spaces and desert haven’t been to Caddo Lake State Park near the Louisiana state line. With its 25,400-acre mosaic of swamps, ponds and bayous, Caddo Lake has a lush landscape that equals anything Louisiana has to offer.

Interesting factoid: The lake was home to a “Pearl Rush” in the early part of the 20th century when local fishermen discovered freshwater pearls in the lake’s mussels. For three years, scavengers flocked to the shallow waters where they sifted through the mussel beds in hopes of finding a fortune.

The building of a nearby dam caused the water levels to rise, thus ending the foraging, but the mussel beds still lie below the murky waters, undisturbed by the boats that transport today’s visitors. It just might be this primeval landscape and not the hidden pearls that is the real treasure. 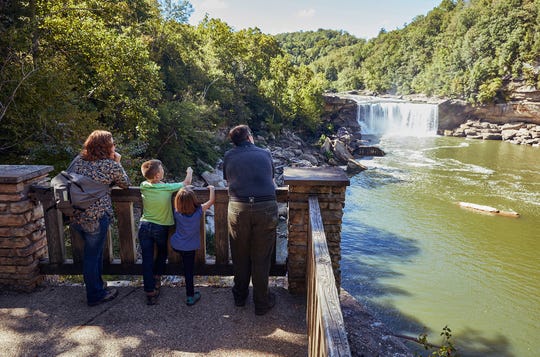 There are only two places on earth where a rare phenomenon — the moonbow, occurring regularly during cycles of the full moon — can be found: at Victoria Falls in Africa or here in southeastern Kentucky.

With a width of 125 feet and a drop of 68 feet, Cumberland Falls might be a mini-Victoria — which spans the borders of two countries, Zambia and Zimbabwe — but try telling that to the throngs of visitors who line the upper and lower observation decks for a look at the lacy plumes of water spilling into the boulder-studded river below.

A perpetual mist surrounds the falls, and this, in part, is what causes the moonbow. The scientific explanation: the light of the full moon is reflected and refracted in the delicate droplets of the mist, causing the arc to appear a ghostly white rather than multihued. OK, but it’s poetry and not science that most think of upon first seeing the moonbow.

The state resort park, located in the middle of the Daniel Boone National Forest, has plenty of other attractions, including some of the best hiking trails in the state.

Our national parks are treasures, but travelers shouldn't overlook those other lesser-known ones that await them in their own backyards.

(Patti Nickell is a Lexington, Ky.-based travel and food writer. Reach her at pnickell13@hotmail.com.)