In this photo taken Wednesday, May 1, 2019, Russian tourist Nadia Kazachenok poses for a photograph taken by Mikhail Samarin at the Fjadrárgljúfur. The canyon is closed, with roadblocks and rope fences, but tourists were quick to pass when the ranger went off duty. (Photo: Egill Bjarnason / AP)

Fjadrárgljúfur, Iceland – A large sign warns motorists that Iceland’s Fjadrárgljúfur canyon is closed to visitors but drivers keep on coming down the narrow gravel road. A ranger at a roadblock has to explain why no one can pass: The vulnerable landscape cannot sustain more visitors.

Bieber’s magical music video “I’ll Show You” was filmed at the canyon and seen by millions, creating overwhelming demand for the once-pristine spot. For a chance to follow in Bieber’s footsteps, his fans are not letting a few fences, signs or park rangers keep them away.

Eager visitors try to sweet-talk ranger Hanna Jóhannsdóttir into opening the gate. Some offer bribes. They should know in advance it’s not going to work.

“Food from people’s home country is the most common bribery,” said Jóhannsdóttir, who recently turned down a free trip to Dubai in exchange for looking the other way at trespassers. 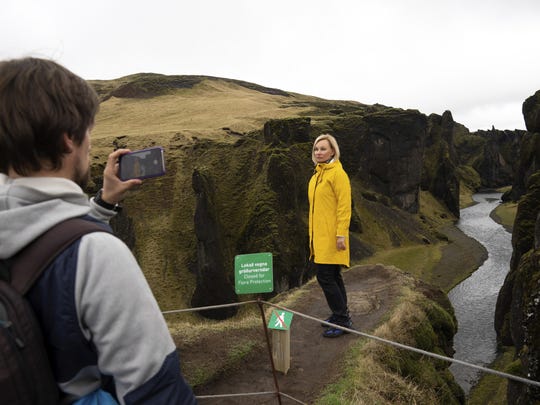 Russian tourist Nadia Kazachenok poses for a photograph taken by Mikhail Samarin at the Fjadrárgljúfur. The canyon is closed, with roadblocks and rope fences, but tourists were quick to pass when the ranger went off duty on a Wednesday afternoon. (Photo: Egill Bjarnason / AP)

The Bieber-inspired influx is one part of a larger challenge for Iceland — the North Atlantic island nation may be too spectacular and too popular for its own good.

Last year 2.3 million tourists visited Iceland, compared with just 600,000 eight years ago. The 20% annual uptick in visitors has been out of proportion with infrastructure that is needed to protect Iceland’s volcanic landscape, where soil forms slowly and erodes quickly.

Environment Minister Gudmundur Ingi Gudbrandsson said it is “a bit too simplistic to blame the entire situation on Justin Bieber” but urged famous, influential visitors to consider the consequences of their actions.

“Rash behavior by one famous person can dramatically impact an entire area if the mass follows,” he told The Associated Press.

Bieber has the third-largest Twitter account at over 105 million followers, after Katy Perry and Barack Obama, according to friendorfollow.com — and he has over 112 million followers on Instagram.

In the viral video — watched over 440 million times on YouTube since 2015 — Bieber stomped on mossy vegetation, dangled his feet over a cliff and bathed in the freezing river underneath the sheer walls of the canyon.

In this photo taken Wednesday, May 1, 2019, Hanna Johannsdottir, a ranger from The Environment Agency of Iceland, poses for a photograph at the mouth of the Fjadrargljufur canyon. The canyon area has suffered environmental damages after intense traffic, prompted by the music video "I'll Show You" by Justin Bieber. (Photo: Egill Bjarnason / AP)

“In Justin Bieber’s defense, the canyon did not, at the time he visited, have rope fences and designated paths to show what was allowed and what not,” Gudbrandsson said.

Over 1 million people have visited the area since the release of the video, the Environment Agency of Iceland estimates, leaving deep scars on its vegetation. After remaining closed for all but five weeks this year, it is expected to reopen again this summer only if weather conditions are dry.

Icelanders are reluctant to fault the pop star, who enjoys enormous support on the island. About 12% of Iceland’s entire population – 38,000 people – attended his two concerts in Reykjavík, the capital, a year after the video was released.

Locals underestimated the canyon’s potential as a major attraction because it’s relatively small compared to those formed by the country’s powerful glacier rivers. But unlike others, it is easily accessed and requires less than a mile of trekking.

The selfies and drone images have stopped — for now — but more exposure is coming. The latest season of the popular HBO drama “Game of Thrones” features scenes filmed at the canyon. The nearby Skógar waterfall and the Svínafells glacier are also backdrops in the fictional Thrones world of warriors and dragons.

The most extreme example, she said, is the Douglas DC-3 U.S. Navy plane that crashed on the black sand beach at Sólheimasandur in 1973. The seven Americans on board all survived but the plane wreck was never removed.

“Then someone decided to dance on it and now it’s one of the most popular places in the country,” said Palsdottir. 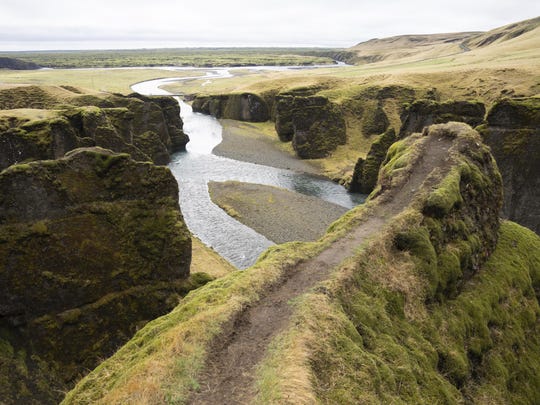 On a foggy Wednesday morning, ranger Jóhannsdóttir observed fresh footprints on the muddy pathway to the Fjadrárgljúfur canyon, indicating that someone had jumped the fence overnight.

She predicted that more people would trespass that afternoon when she left the roadblock to give a presentation at a community center. She was right. Less than 30 minutes passed before tourists began ignoring the fences and signs.

“We came because of Justin Timberlake,” said Mikhail Samarin, a tourist from Russia, traveling with Nadia Kazachenok and Elena Malteseva, who were quick to correct the artist’s last name to Bieber.

“It was so amazing,” said Malteseva about the Bieber video. “After that, we decided it was necessary to visit this place.”

The three took turns posing for a photograph, standing at the edge of an Icelandic cliff.