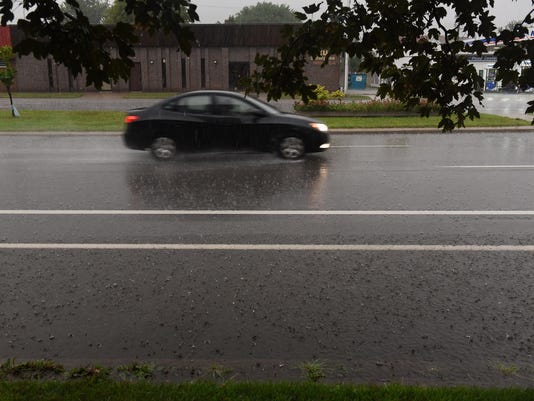 A day of downpours that flooded freeways, sparked power outages across Metro Detroit and flash flood warnings will give way to more rain Tuesday.

Though the heaviest downfalls have doused the region, “there’s going to be a chance all night of some additional rain, even on into early tomorrow,” said Mike Richter, a meteorologist with the National Weather Service station in White Lake Township.

Tuesday's forecast calls for rainfall amounts between a 10th and 1/4 of an inch as highs reach the low 70s, about five degrees below average for the date.

The showers are not expected to last as long as Monday's, but "it could be some locally heavily rainfall," Richter said.

A flash flood advisory also has been issued by the weather service for the counties of eastern Tuscola, western Sanilac and northeastern Lapeer until 12:30 a.m. Tuesday.

By 9:30 p.m. Monday, DTE Energy reported that 7,400 customers had lost power due to the storms. Crews were working around the clock and an estimate for restoration was Tuesday morning, barring other storms, said DTE spokesman David J. Peterson.

Meanwhile, the Michigan Department of Transportation reported that eastbound Interstate 696 at Evergreen in Southfield was closed due to flooding. The westbound lanes of I-696 at Southfield also were closed, according to the department website.

MDOT officials posted a picture on Twitter showing the highway near Evergreen covered in water. "Generator should have water off before midnight," the tweet read.

The department earlier reported the northbound M-39 ramp to eastbound Interstate 96 in Wayne County was flooded.

Once Tuesday's rain clears out, clearer conditions are ahead for the region.

On Wednesday, the mercury is forecast to rebound near 80 under mostly sunny skies.