A double rainbow emerges after the storm near 12 Mile Road in Southfield. (Photo: Evan Carter, The Detroit News)

From Ann Arbor to Downriver, storms swept across southeast Michigan on Tuesday, dumping as much as 4 inches of rain in some spots, leaving flooded roads and power outages.

It was the second day the weather wreaked havoc on the region, and Metro Detroit appears to be in for more rain at least through Wednesday. 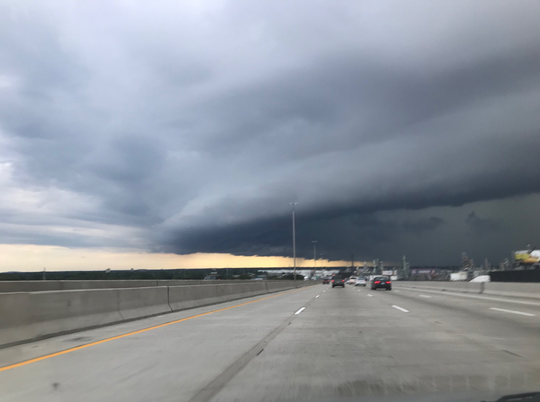 The National Weather Service has issued a flood warning, which replaced a flash flood warning issued earlier in the night, for Wayne, southern Oakland and southeast Washtenaw counties until 3:15 a.m. Wednesday.

More rain is expected, with pockets of heavy rain continuing into the night that will bring more than an inch of additional rain, the weather service said.

"It will then take several more hours for flood waters to recede," the weather service said.

The downpours created flooded areas in a number of communities.

Canton Township's Public Safety Department at 9:30 p.m. reported that Canton Center Road south of Cherry Hill was closed and "multiple vehicles are stranded in this section of road that is currently impassable." Canton had received nearly 3 inches of rain.

The township said secondary roads in the township also had flooding, and the township's Department of Public Works has been called to address the flooding.

Further west, 4.02 inches of rain were reported in Ann Arbor in 90 minutes, and Canton Township had 2.51 inches and Ypsilanti reported 2.28 inches within two hours, the weather service said. Police in the city fielded reports of flooding across multiple intersections and streets, and were working to determine whether any needed to be closed.

Flooding also was reported near Newburgh and Cherry Hill in Westland when several inches of water rose over the curb, according to the weather service.

In the wake of the storm, DTE Energy reported power outages across the region, including clusters of more than 1,000 near Ann Arbor, Wayne and Farmington Hills.

Other spots were predicted to see nearly 2 inches as the storm pushed east, said Dave Gurney, a meteorologist for the weather service station in White Lake Township.

"This sort of heavy rain falling in this short at time has trouble draining," leading to excessive runoff on small creeks and streams, roadways and low-lying spots, he added.

The showers are associated with the remnants of the tropical storm Barry, which has deluged areas in the South.

Another round of storms is possible early Wednesday since "the moisture will still be in place," Gurney said, but the rainfall should not be as widespread.

New rainfall amounts between a 10th and quarter of an inch are possible before the storms diminish in the afternoon, when highs could reach the upper 80s, the weather service said.

The forecast calls for sunny skies on Thursday and temperatures topping out in the low 90s, with heat index values as high as 101.

The mercury could reach the upper 90s on Friday, more than 10 degrees above normal for the date.

"We transition into a very hot and humid pattern," Gurney said.