Strong storms brought hail, heavy downpours as well as a possible tornado on the state's west side Wednesday, leaving about 71,000 utility customers without power across Michigan. 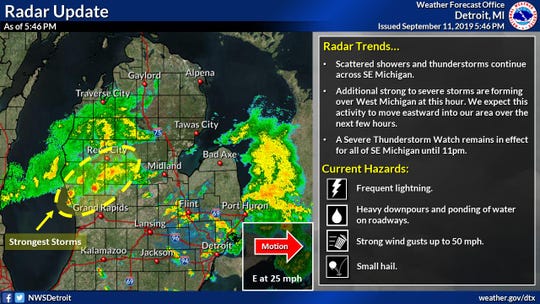 There were reports of damage near Grand Rapids and Sunfield, but a team was expected to survey those areas to confirm if a tornado struck, meteorologist T.J. Turnage said.

In southeast Michigan, the National Weather Service issued a severe thunderstorm watch for much of the area through 11 p.m. It included Monroe, Genesee, Livingston, Washtenaw, Wayne, Oakland, Macomb and St. Clair counties.

A severe thunderstorm watch is in effect until 11 pm this evening. #miwxpic.twitter.com/krwnx6P8Ym

Early rainfall totals included 1.84 inches in Farmington, 1.30 in Marysville, 1.14 in Burton. Large hail was reported in Port Huron and Ortonville as storms pushed through around 3:30 p.m..

DTE Energy reported some 22,000 customers without electricity at 9 p.m., mostly concentrated in Wayne, Washtenaw and Livingston counties.  That figure was down from 38,000 earlier Wednesday.

The utility's website showed clusters of outages across the region, including about 1,500 near Leonard in Oakland County, more than 2,000 north of Canton Township and at least 3,200 near Westland.

"Restoration estimates will be available once crews are able to assess the damage," DTE said in a statement. "Their top priority tonight is to address reported downed wires. ... We know how difficult it is to be without power, and we ask for our customers’ patience as our crews work 16-hour shifts until all customers are restored. We ask that everyone use extra caution when outdoors tomorrow to watch for downed power lines — especially as children walk to school or the bus stop in the morning."

Elsewhere in Michigan, more than 49,000 Consumers Energy customers were without power at about 10:30 p.m., the company said in a statement. More than 20,000 were affected in hardest-hit Kent County.

“Our crews will continue working into the night to return power to as many people as possible, as soon as possible,” said Consumers Energy Vice President Greg Salisbury.

Crews were expected to restore power to most customers by the end of the day Thursday, with the rest on Friday.

The turbulence comes a day after a line of storms that swept through the state sparked strong winds, hail, thousands of power outages in the Thumb region and funnel cloud sightings. Tornado and severe thunderstorm warnings were issued for parts of the state.

Like those rounds, warmth and high humidity fueled thunderstorms Wednesday, said Dave Kook, a meteorologist with the National Weather Service station in White Lake Township. "The more humid the air, the more moisture for the air to work with."

On Wednesday, Detroit Metro Airport reached a high of 89, 13 degrees above average for the date and close to the record, 95, set in 1931, weather service data shows.

Once the storms exit the area around midnight, temperatures are set to drop into the 60s and hover around 70 on Thursday under cloudy skies.

The forecast calls for a 50% chance of storms on Friday as the mercury rebounds into the mid-80s.

Saturday is expected to be mostly sunny with temperatures topping out in the upper 70s, the weather service said.