The city of Detroit is asking residents to remove their cars from the street by 6 p.m. if off-street parking is available

Winter has finally arrived in Metro Detroit with the first big snowstorm of the season, making travel difficult and delaying flights. 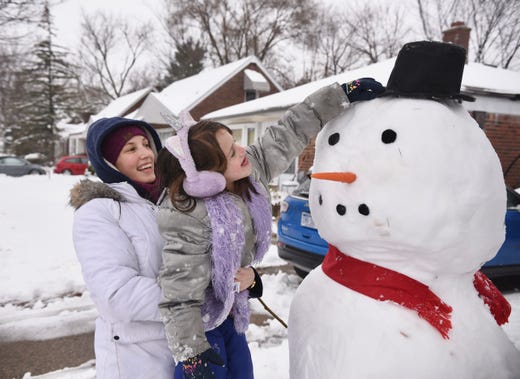 Sara Filthaut, left, of Huntington Woods builds a snowman with her daughter Brooklyn on their front yard along Lincoln Street in Huntington Woods on Saturday, January 18, 2020.  Max Ortiz / The Detroit News
Fullscreen 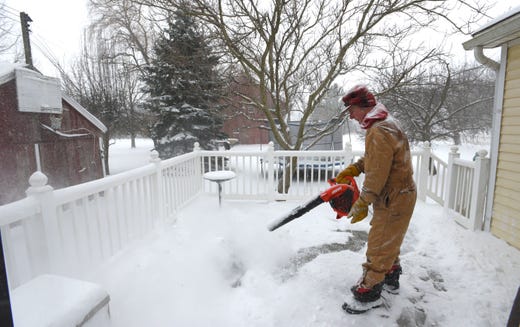 Brian Kresmery of Richmond Township uses a blower to remove snow from his back deck during a snow storm, Saturday morning, Jan. 18, 2020. Todd McInturf, The Detroit News
Fullscreen 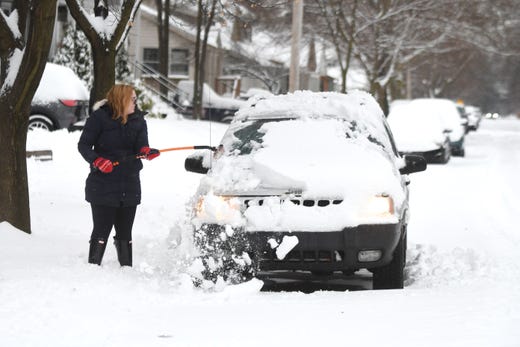 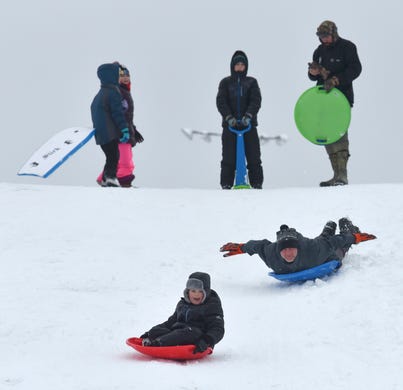 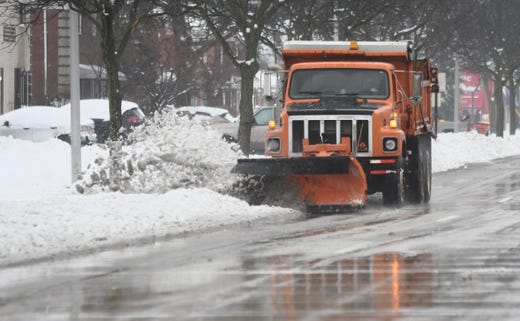 Snow is piled high at the Meijer supermarket along 8 Mile Road in Detroit on Saturday, January 18, 2020. Max Ortiz / The Detroit News
Fullscreen 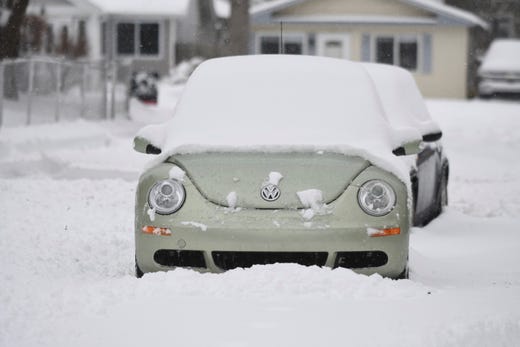 A Volkswagen Beetle peeks through the snow along Leland Street in Ferndale on Saturday, January 18, 2020. Max Ortiz, The Detroit News
Fullscreen 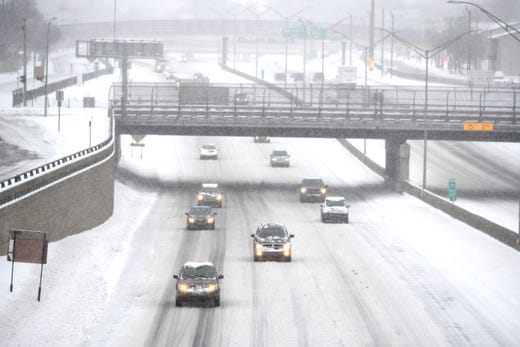 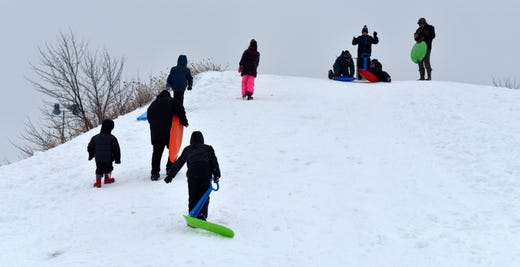 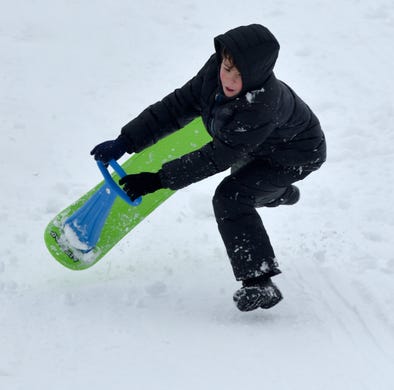 Jacob Shock, 9, crashes his stand up board as he sleds with his 11-year-old brother, Josh Shock (not pictured), both of Mount Clemens. Todd McInturf, The Detroit News
Fullscreen 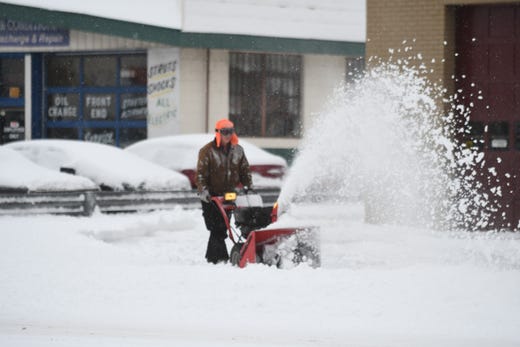 Thick snow is blown off a driveway at Hazel Park Collision along 9 Mile Road on Saturday, January 18, 2020. Max Ortiz / The Detroit News
Fullscreen 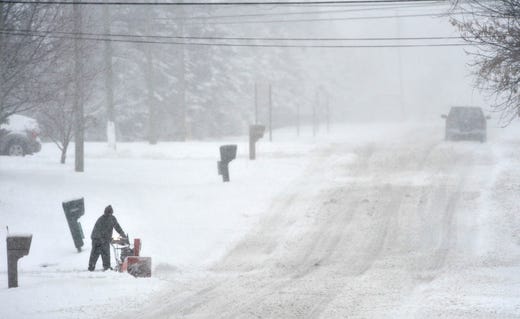 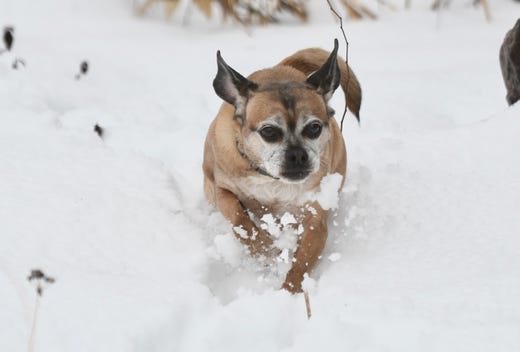 Lucy has fun running through about 8 inches of snow in her front yard along Parkdale Avenue in Royal Oak on Saturday, January 18, 2020. Max Ortiz, The Detroit News Max Ortiz / The Detroit News
Fullscreen 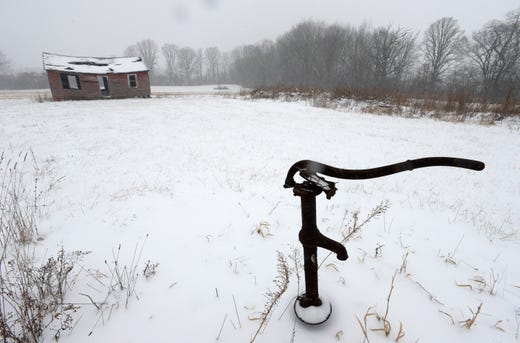 Pedestrians walk along 14 Mile Road near Main Street in Clawson as rain begins to fall after an early morning snow storm on Saturday, January 18, 2020. Max Ortiz / The Detroit News
Fullscreen

In total, 5 to 8 inches of snow showered across southeast Michigan Saturday morning, the weather service said.

Wind gusts of up to 35 miles per hour and snowfall rates of up to 1 inch per hour led to a rapid accumulation of snow and caused dangerous driving conditions with low visibility, according to the NWS radar.

Temperatures will rise into the upper 30s in the afternoon and the snow will transition to a wintry mix before becoming mostly rain or drizzle. 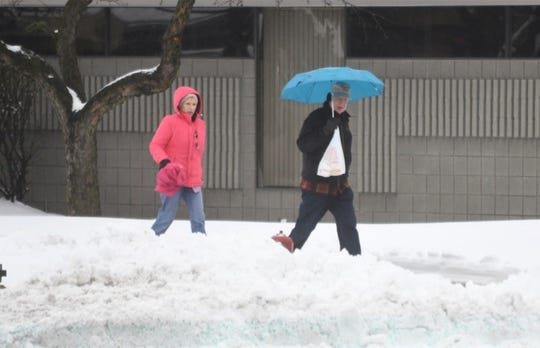 Pedestrians walk along 14 Mile Road near Main Street in Clawson as rain begins to fall after an early morning snow storm on Saturday, January 18, 2020. (Photo: Max Ortiz / The Detroit News)

"Wind gusts in excess of 40 mph, especially along/south I-96, will lead to low visibility and blowing snow through Sunday morning," according to the National Weather Service. 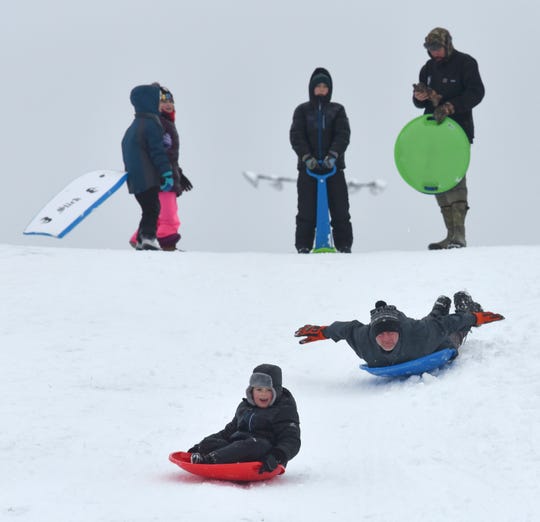 Alan Hanna follows Owen Bonior, 6, both of Mount Clemens, as they sled close to their home. (Photo: Todd McInturf, The Detroit News)

Contractors will begin plowing all residential streets in Detroit this evening. The city is asking residents to remove their cars from the street by 6 p.m. if off-street parking is available.

“We know that parking on residential streets can be difficult after significant snow falls,” DPW Director Ron Brundidge said in a statement. “We don’t plan to tow vehicles, especially since on-street parking is the only option in some areas, so we are asking for resident’s cooperation."

Roadways that have been identified as snow emergency routes will have signs posted up to 48 hrs in advance to prohibit parking for the purpose of plowing.

The city is also reminding residents and businesses they are responsible for maintaining their sidewalks in a manner that makes them safe for pedestrians.

According to FlightAware's MyseryMap, Detroit Metropolitan Airport had three canceled flights and 47 delayed at 2:30 p.m.

Sara Filthaut, left, of Huntington Woods builds a snowman with her daughter Brooklyn on their front yard along Lincoln Street in Huntington Woods on Saturday, January 18, 2020. (Photo: Max Ortiz / The Detroit News)

How much snow has fallen across Michigan

The most snow has fallen in Monroe with a total of 8.2 inches, according to the weather service.

Here are totals from across Michigan as of Saturday morning.

In addition to the snow, winter weather triggered a flood warning due to high winds and waves for lakeshore residents in some areas that have already been hit hard by erosion.

Mason, Oceana, Muskegon, Ottawa, Allegan and Van Buren counties can expect significant beach erosion through 7 p.m. Sunday, with inundation of low-lying areas along the lakeshore and in river mouths and possible road closures.

Strong south-southwest winds of about 30 mph during the day will lead to elevated water levels particularly around Harsen`s Island and Anchor Bay, the service said.

Consumers Energy told customers to expect the possibility of power outages as the buildup of ice on powerlines and trees could cause lines to snap or limbs to fall on lines.

At 2:30 p.m. no  widespread outages were reported by either Consumers or DTE Energy. 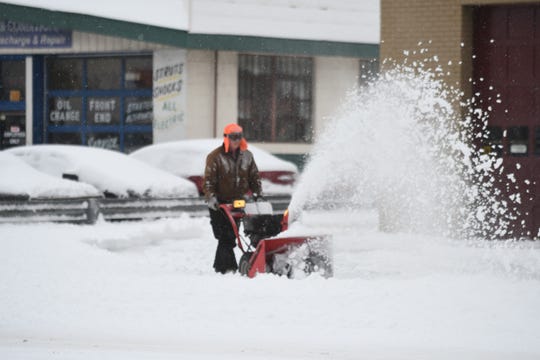 Thick snow is blown off a driveway at Hazel Park Collision along 9 Mile Road as snow covered cars and roads are cleared on Saturday, January 18, 2020. (Photo: Max Ortiz / The Detroit News)

On Friday, officials for the Oakland County cities of Auburn Hills and Berkley declared snow emergencies. Auburn Hills has set it effective from midnight Friday through noon Sunday. In Berkley, it's in effect starting at 10 p.m. Friday. City officials will notify the public when it has been lifted. Officials in Taylor declared a snow emergency from midnight Friday until noon Sunday. The declaration means parking is prohibited on residential streets to enable snow removal crews to clear roads as quickly as possible. Vehicles parked on roadways could be ticketed or towed.